What is the float test? How do I do it?

The float test is a relatively simple procedure of placing a Star Wars action figure weapon or accessory into a bowl of water and observing if it floats or sinks.

All repros sink and all originals float, right? Wrong ... most repros do sink, but there is a number of repros that do not. There is also a small number of originals that sink when the majority float - the Gamorrean Guard axes, Amanaman's staff, and two out of the three pop-up sabers are all sinkers, just to name a few. In addition to this, some original single-telescoping light sabers can float while some can sink!

Repro manufacturing has become more sophisticated over the years. Fakes are not only imitating the looks of their genuine counterparts more faithfully but also their behaviours, leaving vintage collectors and sites like TIG with an even harder task to identify what is real and what is fake.

The 'Floating Repros' below mimic perfectly the behaviour of their original counterparts by floating in water.

Is your floater really a sinker?

Another important thing to consider with the float test is that although a weapon or accessory appears to be floating this may not be completely accurate. Some elements of plastic provide a certain buoyancy, but when submerged or 'tapped' by your finger they will immediately sink and remain at the bottom. Therefore, it is very important to not only place the subject on the surface but to submerge it fully in the water and observe its behaviour.

Yoda's original cane (SINKER) is a good example of an accessory that will at first float but then SINK to the bottom when submerged. 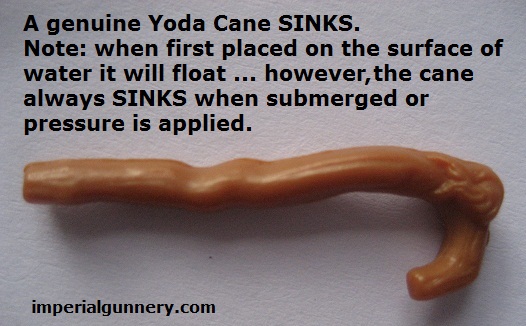 Below is an example of a repro R2-D2 saber that floats when placed on the surface and rises back to the surface when submerged or tapped - just like its genuine counterpart. 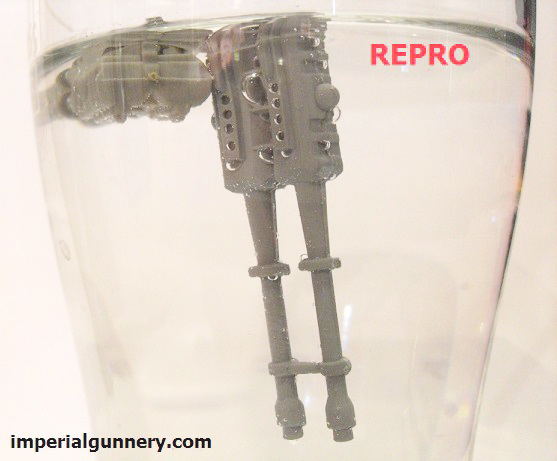 As you can see, the float test is not always so straightforward. With these tips you should have a better understanding of what is involved and be able to carry out your own tests alongside other verification methods.

What is the drop test? How do I do it?

The drop test is an acoustic test to judge the sound a weapon or accessory makes when dropped onto a flat surface.

The test is based on the principle that the types of plastics used in the 1970s and '80s to produce vintage weapons are different to the plastics used today. Because of the different chemical structures between the two it is believed there are subtle differences present in the texture and sound quality.

To make the test simply drop a weapon onto a flat surface - like a table - and listen to the noise it makes when it lands. Try dropping it from just a short distance (around 8 inches / 20 cm should suffice) and listen carefully to the sound it makes when connecting with the surface.

Original weapons make a different sound to repros. You may have to take the time to practice, listen and compare originals with repros. As a basic indicator, reproduction weapons have a hollow and light sound and seem to bounce a bit more than originals. The sound of an original weapon hitting a flat surface is fuller and there seems to be less bounce.

This test is not conclusive and should always be used as a guide along with other types of verification. I recommend that you DO NOT try this test with any weapons or accessories that you believe may be fragile and prone to breaking.

What are translucent weapons and accessories?

Many vintage weapons and accessories have a number of colour variations and some of these may appear translucent. The translucent effect is likely caused during the injection moulding process and is a result of an insufficient amount of dye being added to the plastic and/or poorly mixed pigment granules.

The translucence can sometimes be visible to the naked eye but is better seen when held to a light source. Many dark-coloured accessories like blue and black blasters and rifles will show varying degrees of translucence - often revealing blue or green shades. The Chewbacca Bowcaster is a good example. Some accessories will only show a faint translucence seen on the extremities or thinner parts.

What is the Light test? How do I do it?

To make the test place the subject against a strong light source such as natural light or a torch and observe. The below pictures are all original accessories and show varying degrees of translucence

It is important to note that not all original accessories are translucent and this test, like the others before it, should only be used as a starting point alongside other methods of verification. It is also important to note that some repros can be translucent (thankfully not many at this stage) and TIG is keeping a list of these for future verification purposes. Contact us on the forum if you have any concerns. 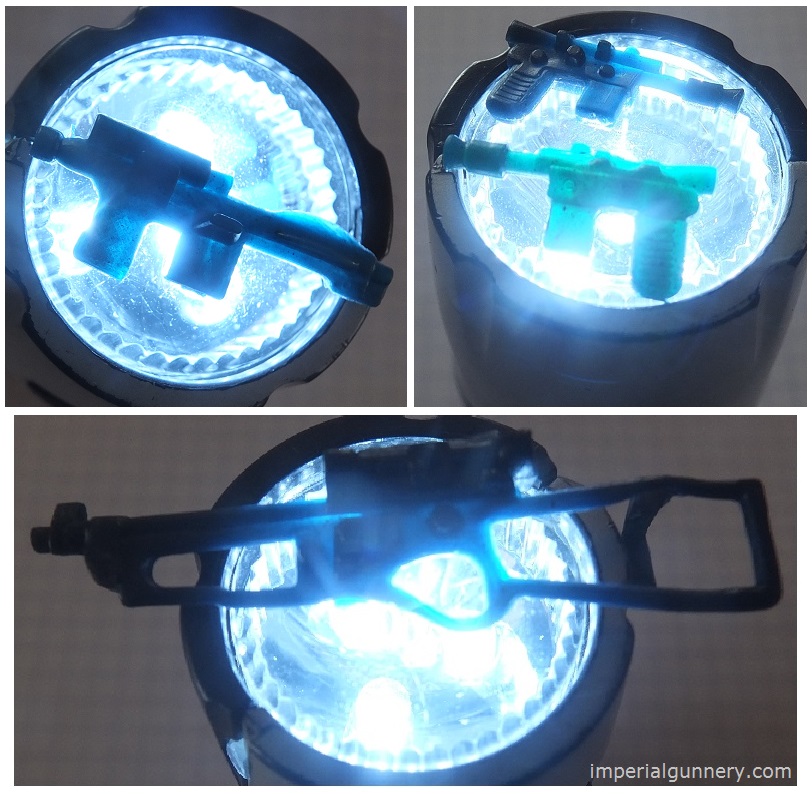